No. 10 Mines upsets nation’s No. 1 team to hoist RMAC trophy 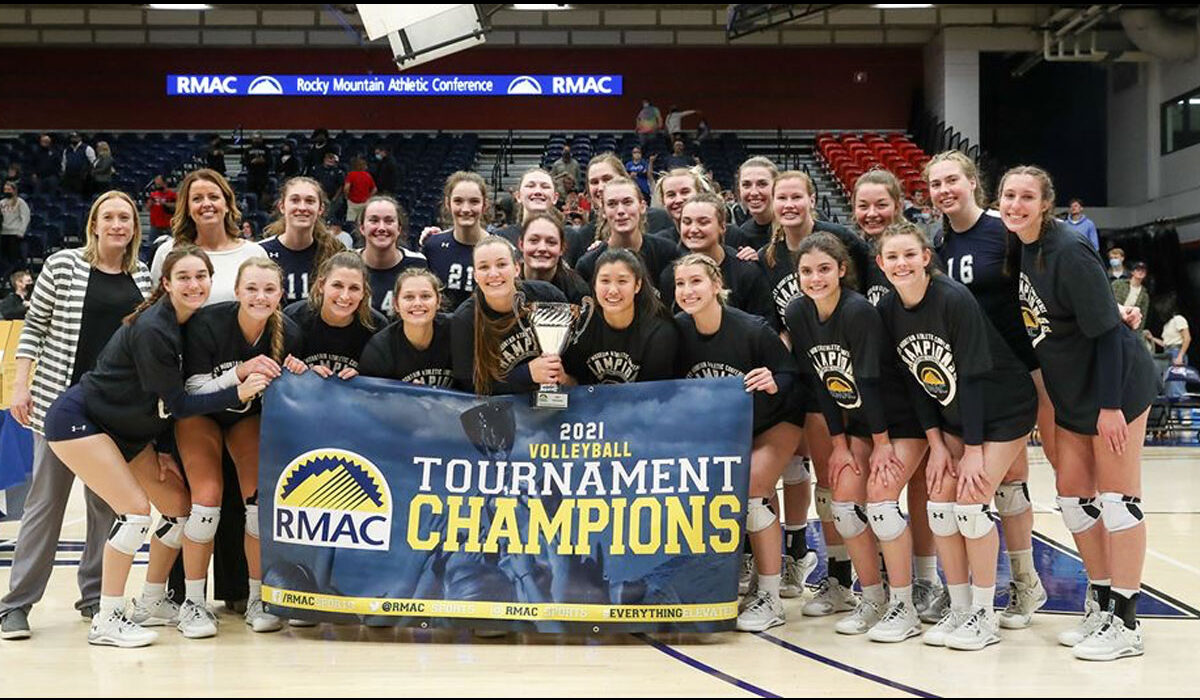 Drew Stokes’ 50-assist, 16-dig double-double along with three service aces helped her clinch tournament MVP honors. However, Megan Neilwas undoubtedly the hero of the evening as the outside hitter put down 12 kills on 24 attempts with zero errors to hit .500 in just four sets. She also notched one ace, one block and one dig. Additionally, Amanda Donais was named to the RMAC All-Tournament team as well thanks to her own double-double of 15 kills and 13 digs while adding two aces. Elle Duis joined Donais and Stokes on the all-tournament squad after racking up 28 digs and five assists.

Overall, Mines (26-3) had four players touting double-digit kills as Taylor Hicken and Julia Eiken notched 13 and 12 apiece. Five Orediggers boasted double-digit digs with Danielle Mullen and April Jergensen joining the party at 12 digs and 11 digs, respectively. Jergensen produced two service aces as well. Rose Stuewe had an off night against the Roadrunners, but still made the RMAC All-Tournament team thanks to 20 kills on Friday night against Colorado Mesa. Also notable was Lindsey Jin leading Mines with three total blocks including two solo stops.

With the loss, MSU Denver (26-3) saw its 22-match win streak come to an abrupt halt. The Roadrunners were held to .174 hitting in the match as Mines totaled eight aces and five blocks. The Orediggers’ 98 digs were arguably most significant in the win. With the victory, Mines claimed its third consecutive RMAC Tournament title. All three championship matches have featured the Orediggers and Roadrunners. Additionally, Mines extended its run of conference championships. Now, for the last 10 years, the Orediggers have won either the RMAC Tournament, the regular season, or a share of the regular season.

On a day that saw Oredigger action begin at 6:30 a.m. (MT), it was Mines volleyball providing one-half of a thrilling, postseason nightcap. In a reprise of the regular-season’s five-set showdown, Mines and MSU Denver lived up to the billing of a showdown between two teams ranked in the nation’s top-10. Oredigger nation showed its respect to the matchup by turning out in droves, and providing something close to a home-match environment for their ladies.

All that being said, the early going was rough for the lower-seeded, visiting squad. In the opening set, Donais and Eiken hit .500, or better, and combined for nine kills. However, the top-ranked Roadrunners made up the difference with two blocks and four aces while Mines failed to record a block. MSU Denver claimed the frame by a score of 25-22. That led to another back-and-forth affair in game two where the home team appeared to grow in confidence and dominance with a 25-21 win. Even though the Orediggers improved their hitting percentage, so did the Roadrunners. The 2-0 advantage had doubters counting Mines out.

What potentially went unnoticed was the entrance of Neil as a pin hitter partway through the second game. She quietly knocked down two kills on two attempts and carried a 1.000 average on the attack into the third set. At that point, Neil lashed out for five kills on eight attempts to hit .625 and drive the Orediggers to their first win of the night at 25-19. The Kansas native’s efficiency and fire carried into the fourth frame where she added two more kills and hit .500. Even bigger in another decisive frame was four kills from Hicken and seven digs from Duis. Even though MSU Denver rallied back to a 22-21 disadvantage, Jergensen’s ace for the penultimate point all but sealed Mines’ 25-22 win to force the ultimate set.

Poetry would have called for another game going point-for-point. However, the score and the statistics show that the fifth frame was all Orediggers. The visitors jumped out to a 5-2 lead with Neil accounting for two of those points on kills. That advantage expanded to 6-3 where the fans could feel the end coming. At 10-4, MSU Denver finally put together back-to-back points, but it was to no avail. Mines stepped back and allowed the opposition to account for three of the last five points by way of error. Neil struck again to make it 14-8 and Eiken closed it out with the final kill.

NOTABLES
– Saturday’s win extended Mines’ win streak to nine matches and marked the Orediggers’ first-ever win over an opponent ranked #1 in the national poll.
– Mines is now 21-65 in the all-time series against MSU Denver with a 6-4 mark in the last 10 matchups.
– Stokes moved her season assists total to 1,220 which improves her to #8 on Mines’ all-time, single-season list. She already holds the #3 and #5 slots.
– Since 2015, Mines is 17-2 in the RMAC Tournament while hoisting the conference cup five times.
– The Orediggers have not lost in the league tournament’s championship match since 2012.
– Stokes also toke sole possession of #3 on Mines’ single-season service ace list. Her three aces on Saturday pushed her to 44 for the season.
– Duis upped her season total to 471 digs which ranks her #11 in the program record book.
– The Orediggers’ .204 mark on the attack was their second-lowest output of the entire season.
– Donais now boasts 16 double-doubles in her career while Stokes touts 23.
– Head Coach Magalei is now 318-101 in her career at Colorado School of Mines including a mark of 23-9 in the RMAC Tournament.

WHAT’S NEXT
With Saturday’s win, Mines claimed the RMAC’s automatic bid for the NCAA Tournament. However, the Orediggers were already #2 in the latest regional rankings. They now await the NCAA Selection Show on Monday at 5:30 p.m. to find out their first-round opponent in the NCAA South Central Region Tournament.